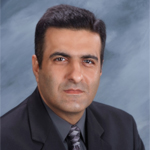 
Dr. Ijaz obtained his Bachelor of Medicine, Bachelor of Surgery degree from King Edward Medical College, Pakistan in 1995 where he received the President Gold Medal award for best all around graduate. His residency program was completed in 1998 through Monmouth Medical Center, New Jersey.

He then joined a private practice in Griffin and Jackson Georgia. In October 2003, he moved to Big Spring, Texas and worked as a private practioner until mid 2005. He then entered the University of Arkansas for Medical Sciences Nephrology program and completed his nephrology fellowship training from 2005-2007.

In July, 2007 he partnered with Dr. Alam in starting their current private Nephrology practice in Little Rock, Arkansas. He is a certified American Diplomat in Internal Medicine and Nephrology and a current member of the Renal Physicians Association and the National Kidney Foundation.

He is currently Medical Director for DaVita dialysis center in Jacksonville Arkansas.